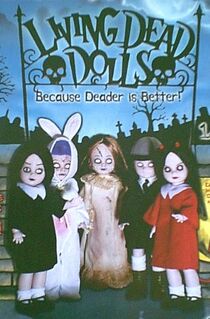 The first series of Living Dead Dolls was released in March of 2001.

All retired (Laid to Rest)

Note: A doll's value is related to the condition of the doll, the rarity of the doll due to limitations in production/general rarity/etc., whether or not the doll is sealed, and whether or not the doll comes with its coffin/death certificate/chipboard/accessories, etc. The prices below are rough estimates based on collector's recommendations and general value progression over time.

Community content is available under CC-BY-SA unless otherwise noted.
Advertisement